Art-A-Whirl is the largest open studio art crawl in the United States and it happens here in Minnesota, specifically in Northeast Minneapolis.

I will be displaying my photography in the Grain Belt Bottling Building @ 79 13th Ave NE, which is on the corner of 13th Ave NE and Marshall

I am in studio 209, stop by and take a look at my art as well as all of the other incredible art on display and then take a piece home for your wall!
Posted by Unknown at 8:38 AM No comments:

I spent the first weekend of the new year in various places in central and northern Minnesota in search of owls.

Saturday was all about the Snowy Owl. What an incredible bird! It normally lives in the tundras of Canada and only goes this far south into Minnesota, (and other parts of the northern United States), when there is a shortage of food due to a collapse of the main food source, (the lemming), or there are too many owls for a normal food source to support. This is called an irruption and t's not something that happens every year. I believe that there are Snowy Owls that do overwinter in Minnesota every year, but they are normally in the very northern parts of the state.

We drove to the Sauk Rapids area, where we knew approximately where the owls were supposed to be found, but it's not an X marks the spot. You start with where they've been seen and widen your search. This particular trip, we went to the spot they were seen and we found the owl almost immediately. This was the first snowy owl I have ever seen and it was a joy to do. 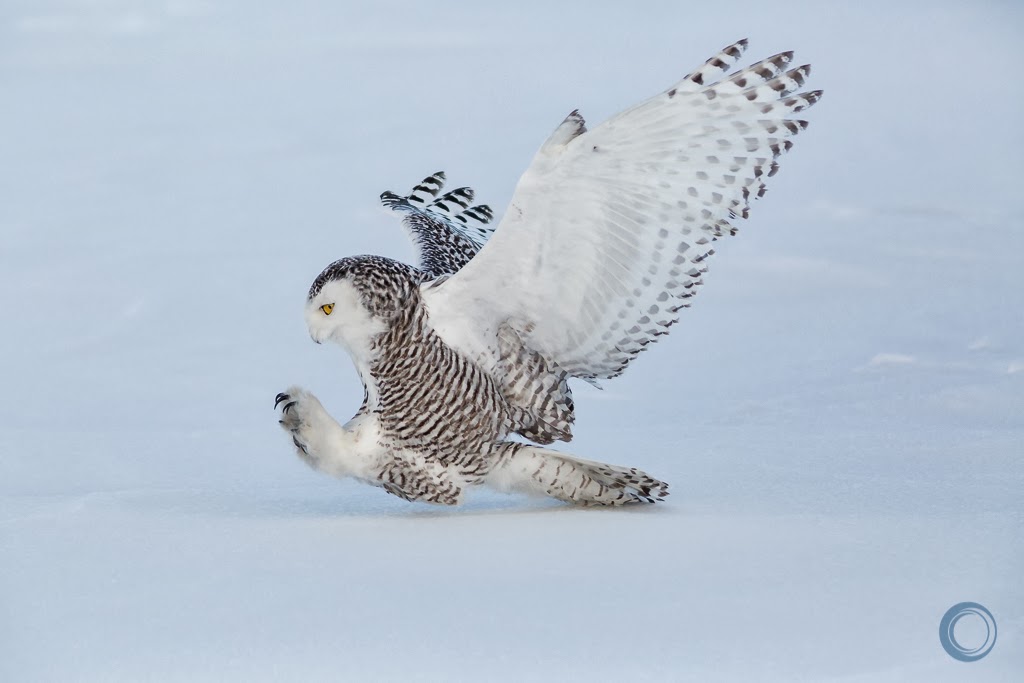 We spent a couple of hours being entertained by this owl. Other people would stop and take a quick photo and then move on. A number of people told us that the owl has been in the area since Christmas. One person commented that there was another one south of where we were, so as the light faded, we headed out and found another snowy owl. This one was way more aloof and spent his time hunting out on the tundra.

Sunday proved to be a bit more difficult. We started out and found a couple of snowy owls in the Ramsey area, but it was very industrialized as well as a lot of car traffic, so I didn't get many good images and we felt very uncomfortable trying to get images around all the traffic, so we moved on. We then started our trek up north in search of some great grey owls. We ended up somewhere north of Aitkin Minnesota and we found no great grey owls, but we did find two northern hawk owls. These owls are miniature rocket ships! They launch of a branch and fall like a peregrine falcon, they fold up their wings and just dive! It was very difficult to get good images of these wonderful little birds, but I am happy with what I came home with.

In the end, it was a great weekend and for my first attempt at owl photography it was awesome. I am definitely going to go again!
Posted by Unknown at 2:45 PM No comments:


Here's a high level description of how to make gunpowder art
1. Pour gunpowder on a hard surface in an area that approximates the size of the piece that is going to be made.
2. Place your subject on the gunpowder.
3. Place your masonite board gesso side down, toward the gunpowder.
4. Secure the board with weight(s).
5. Light gunpowder with a sufficiently long flame source, allowing you to step back quickly.
6. Step back quickly.
7. The gunpowder should burn in about a second and a half. The gunpowder should not explode, it should just go whoosh, with flames shooting out all four sides of your board.
8. Once the fire has gone out, pick up the piece and turn it over to see what has been created.

Posted by Unknown at 2:30 PM No comments:

A couple weekends ago, I drove up to Two Harbors with a friend and we met someone who was going to guide us around the area to get some different images than we would normally get.

It turned out to be an awesome weekend and a very cold one as well. We drove up on Friday afternoon and the high was around 6 degrees above zero, but the wind was pretty raw coming off of Lake Superior. It was extremely slippery as everything was ice covered.

We got back to the breakwall in time for sunset and it did not disappoint. I had to run back to the truck as I had left my tripod quick release plate in my bag, but I had plenty of time to get it set up.


After sunset, we drove back to the hotel and had some dinner and then headed out to Split Rock State Park to get some star images. For those of us that live in large metropolitan areas, you just can't imagine how many starts are really in the sky! Along the way we photographed a wool spin too! What a very cool and cold cold night. The wind was just howling when we were out on Ellingson island in the park.
We finally got back to the hotel after midnight and were up the next morning for sunrise where the Stewart River empties into Lake Superior. We didn't get much of a sunrise as it was snowing, but we did have a nice outing, and I only fell into the lake twice.


After breakfast at Betty's Pies, we headed to Christian's parents and snowshoeing for the first time. It was a lot of work, but it was a lot of fun. Sensing that we didn't really need any rest, we then headed to to Stoney Point to catch some afternoon shore images and sunset, and what a sunset it was. We saw a sunset that I've never seen before.


Having had a long day, we decided to go back and have dinner and then get up for one last sunrise before packing up and heading back home.
Getting up before the crack of dawn, we headed out to Split Rock State Park to get sunrise images over Ellingson Island and of course the lighthouse. What we didn't expect was -18 degrees when we got to the park! We found that the bay had iced over during the night and we were getting some awesome sea smoke over the bay which was being lit up by the sunrise. It was a spectacular morning and end of our time in Two Harbors.


It was an incredible weekend and one that I wish everyone could have shared in.

Posted by Unknown at 2:19 PM No comments: